Exercises to Do While Watching Sports

Gameday is often connected to a relatively unhealthy diet. Chips, wings, and other fan foods are often the easy choice for an afternoon on the couch, but the high amounts of calories and fat can take a toll on your body. Turn your typically lazy day into an active one with this simple workout plan that you can do while watching TV.

Your cue to get moving
The best part about this plan is that it only involves exercising during commercial breaks, so you won’t miss any of the game. There’s no timer or alarm needed—just watch and wait for the next commercial break to begin your next exercise. The average basketball game runs over two hours with commercials. That means, if you keep rotating this workout plan during the whole game, you’ll be in for a pretty lengthy routine. Feel free to cut it off after a half if you’re running low on energy.

First commercial break
The first set of workouts are meant to target the leg muscles. Start with the first exercise then alternate after each commercial—in other words, each set should last between 15 and 60 seconds.

Second commercial break
The second set of workouts are meant to target the upper body. Each push-up exercise is meant to increase in intensity from first to last. Again, split up the exercises by commercial to alternate.

Third commercial break
The third set of workouts are meant to target the abdominal muscles. If you need to, feel free to take a breather for the length of a commercial between exercises.

Fourth commercial break
The fourth set of workouts are cardio exercises, which are meant to increase your heart rate and burn calories.


After the fourth set of exercises, jump back to the first and start the routine over again. The workout lasts as long as you want it to. Shoot for a half to begin, then graduate to an entire game if you really want a challenge. And don’t limit yourself just to basketball—this plan works with all types of sporting events or TV shows, as long as they have commercial breaks.

Always talk to your doctor before you start a new exercise routine. 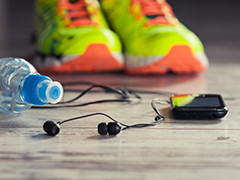 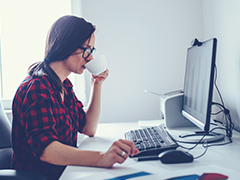 Sit All Day? Working Out Can Help You Combat Disease 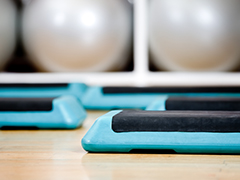 Physical Activity is Good for Your Heart

Read Article
You will be going to a new website, operated on behalf of the Blue Cross and Blue Shield Service Benefit Plan by a third party. The protection of your privacy will be governed by the privacy policy of that site. Please review the terms of use and privacy policies of the new site you will be visiting.