Here's How to Tell if You're Iron Deficient

Iron is your blood's powerhouse. It helps make hemoglobin, the part of red blood cells that transports oxygen and carbon dioxide.

When you're low in iron, you become anemic, which means that you're low on red blood cells and aren't transporting oxygen efficiently. Symptoms of low iron levels include:

Iron deficiency is the most common nutritional deficiency in the United States. The good news is that you can get most of what your body needs through proper nutrition. Some of the best sources of dietary iron are:

If you're a vegetarian or vegan, look for iron in: 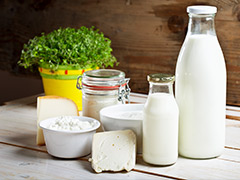 How Much Vitamin D Do You Need Every Day?

Are You Getting Enough Vitamin E?

Fuel Up with These 10 Protein-Packed Foods

Read Article
You will be going to a new website, operated on behalf of the Blue Cross and Blue Shield Service Benefit Plan by a third party. The protection of your privacy will be governed by the privacy policy of that site. Please review the terms of use and privacy policies of the new site you will be visiting.